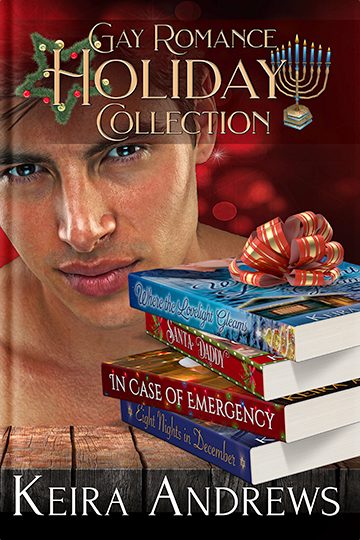 ADD TO GOODREADSSUBSCRIBE TO M/M NEWSLETTER

Eight Nights in December—A geek. A virgin. One sexy holiday.

Orphaned Lucas figures spending Hanukkah with his obnoxious roommate’s family in New York City is better than staying alone on campus upstate. He ends up sharing a room again, this time with his roommate’s brother. Geeky photographer Nate isn’t at all what Lucas expects. In fact, he’s incredibly sexy—especially when he invites Lucas into his darkroom…

In Case of Emergency—Former stepbrothers find Christmas romance under the tree.

After years alone, Daniel Diaz is finally ready to shake up his orderly, solitary life. He’s about to leave for a cozy Christmas getaway when he gets the call from the ER that his former stepbrother has been admitted with a concussion and a broken hand—and Cole put him down as his emergency contact. Why the hell would he do that? Daniel barely knows the guy. But Cole has no one else to look after him and strict doctor’s orders not to be left alone. So, fine, Daniel will bring him along on vacation…

Hunter Adams is still a virgin, can’t find a real job, and has no clue what to do with his life. In desperation, he returns to his humiliating old job as an elf at the Santa’s Village. The Santa on the job is an unexpectedly sexy lumberjack, twice Hunter’s size and age. He’s grumpy and intimidating, but he makes Hunter feel very naughty. When a surprise blizzard traps them alone on Nick’s isolated tree farm, Nick’s daddy instincts kick in…

Where the Lovelight Gleams—Will co-stars take their romance offscreen this Christmas?

Actor Ryan Drake is pining. He may get to kiss gorgeous Cary Holloway on the set of their hit sci-fi TV show, but he knows it’ll never happen in real life. Charming Cary has a starlet girlfriend, and despite their sizzling onscreen chemistry, he and Ryan are just friends. Right? Then Cary accepts Ryan’s invite to spend the holiday with his family in Canada. Little does Ryan know, Cary’s coming to terms with his bisexuality and deep attraction to his co-star…

Grab these sexy holiday romances now—available together in digital and print for the first time!

Buy the box set exclusively at Amazon or borrow in Kindle Unlimited: