You are here: Home / Contemporary / City of Lights 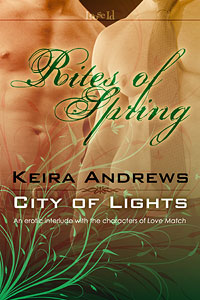 Life couldn’t be better for Jesse McAllister: he’s just won his second Grand Slam tennis title and celebrated in style at one of the top restaurants in Paris. With his family and his lover, Luke Rossovich, by his side, Jesse’s had a day to remember.

But Luke’s not finished celebrating, and if he has his way, their night in the City of Lights is just getting started.

An excerpt from City of Lights

Once upstairs on the top floor, Luke tipped Jean-Paul and shut the door to the suite. Jesse turned in a slow circle, gawking. “And I thought the Hilton was nice. Holy shit, Luke. This room must cost a small fortune!”

At the reminder of that afternoon’s victory, Jesse beamed. “Yeah, good thing. It’s also a good thing you got that job with ESPN.”

Luke rolled his eyes. “Please, I do sixty-second how-to’s on improving your strokes. It’s not like I’m a commentator.”

“Not yet. But you will be.” Jesse noticed the private terrace and opened the doors wide. “Oh my god! Have you seen this view?”

Luke had inspected the room a few days earlier, and the incredible view of the Eiffel Tower had sold him on it. The bathroom overlooked the city skyline as well, and the accommodations were luxurious in every way. Overstuffed cream-colored chairs and pillows with gilded accents made the rooms resplendent.

Standing behind Jesse on the terrace, Luke wrapped his arms around Jesse’s waist. “Not bad, huh?”

Jesse sighed contentedly. “Not bad.” He turned in Luke’s arms and pressed their lips together. “What’s the bedroom look like?”

They made quick work of their clothes as they crossed the living room, and were naked by the time Luke pressed Jesse down into the soft mattress in the golden bedroom, the duvet tossed aside. Their kisses started out playfully, but soon their tongues were demanding, breath coming in short gasps. Jesse arched up, rubbing their hardening cocks together. “I missed you so much,” he muttered.

“I’ve been here the whole time.” Luke pulled back, catching his breath, a smile playing on his lips. “But I missed you more.”

Jesse’s arms wrapped tightly around Luke’s back. “Sorry I’ve been so distracted.”

“It’s safe to say your distraction paid off.”

The infectious grin was back. “I won. I can’t believe I actually won.”

“Just trying to show me up as usual.”

“That’s right. Next time we get in a fight I’ll be sure to remind you that there’s only one French Open champion in this relationship.”

They laughed and kissed again, bodies moving together, skin soon becoming slick with sweat. Luke moved lower on the huge bed, his lips marking his path down Jesse’s body. He took Jesse’s cock in his mouth, making Jesse gasp with pleasure. Luke took him deeper into his throat, wrapping his hand around the base of Jesse’s cock as his head bobbed up and down. When he knew Jesse was getting close, Luke pulled back, his tongue making one last sweep around the tip of Jesse’s cock.