You are here: Home / Library / Valor on the Move 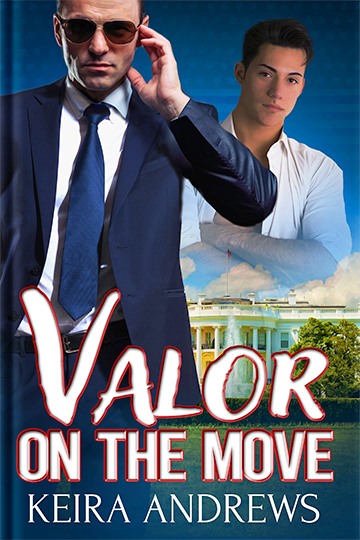 He’d give his life to protect the president’s son. But he never expected to risk his heart.

Growing up gay in the White House hasn’t been easy for Rafael Castillo. Codenamed “Valor” by the Secret Service, Rafa feels anything but brave as he hides in the closet and tries to stay below the radar in his last year of college. His father’s presidency is almost over, and he just needs to stick to his carefully crafted plan. Once his family’s out of the spotlight, he can be honest with his conservative parents about his sexuality and his dream of being a chef.

It’s definitely not part of Rafa’s plan to get a new Secret Service agent who’s a walking wet dream, but he’s made it this long keeping his desires to himself. Besides, it’s not like Shane Kendrick would even look at him twice if it wasn’t his job.

Shane’s worked his way up through the Secret Service ranks, and while protecting the president’s shy, boring son isn’t his dream White House assignment, it’s an easy enough task since no one pays Rafa much attention. He discovers there’s a vibrant young man beneath the timid public shell, and while he knows Rafa has a crush on him, he assures himself it’s harmless. Shane’s never had room for romance in his life, and he’d certainly never cross that line with a protectee. Keeping Rafa safe at any cost is Shane’s mission.

But as Rafa gets under his skin, will they both put their hearts on the line?

Valor on the Move by Keira Andrews is a gay romance featuring an age gap, an older bodyguard, Jane Austen levels of pining, steamy first times, forbidden love against the odds, and of course a happy ending. This is the first half of the complete and bingeable Valor Duology.

“You know that feeling when you finish a book and want to turn around and start it all over again? Well, this book will give you that feeling—and how! 5 stars.”
~ The Blogger Girls

“This book had a little bit of everything, was impossible to put down, and left me with a craving for more when it ended.”
~ Prism Book Alliance

“I had to force myself to put it down to sleep, then practically had grabby hands as soon as I woke up. Recommended!”
~ Gay Book Reviews