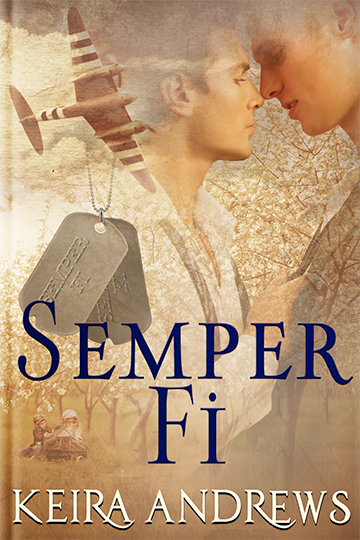 The war is over. The battle for love has just begun.

As Marines, Cal and Jim depended on each other to survive bloodshed and despair in the Pacific. Relieved to put the horrors of war behind him, Jim went home to his apple orchard and a quiet life with his wife and children. Knowing Jim could never return his forbidden feelings, Cal hoped time and an ocean between them would dull the yearning for his best friend.

But when Jim’s wife dies, Cal returns to help. He doesn’t know a thing about apple farming—or children—but he’s determined to be there for Jim, even as the painful torch he carries blazes back to life. Jim is grateful for his friend’s support as he struggles with buried emotions and dark wartime memories. Then Jim begins to see Cal in a new light, and their relationship deepens in ways neither expected. Can they build a life together as a family and find happiness in a world that would condemn them?

“This is one of those books I would recommend to any romance lover. It’s just so well done. Every single aspect of Jim and Cal is fully fleshed out and develops at just the right pace. Grade: A.”
~ Fiction Vixen

“Beautifully written and a powerful story. Highly recommended.”
~ Boys in Our Books

“Andrews has, once again, crafted a beautiful story with a unique premise and an important theme.”
~ I’m With Geek