You are here: Home / Library / Rise: A Gay Fairy Tale 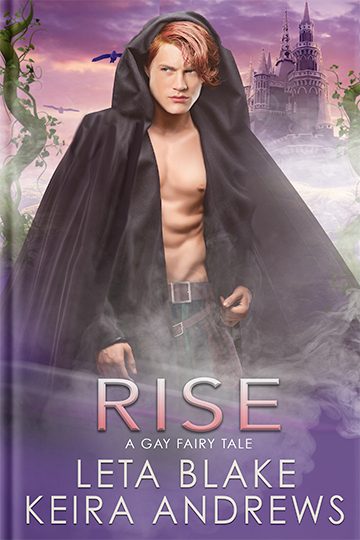 What happens when Jack meets a sexy man atop that beanstalk?

Rumors of treasure have long sent fortune hunters clambering up a magic beanstalk to a mysterious castle in the clouds. Survivors told of an evil giant who guards the gold and glittering jewels with savage strength. No sane man would dare risk the climb—but Jack has nothing left to lose. Shunned for his evil red hair and abandoned by his cruel lover, he’s desperate to escape his life.

Rion isn’t a giant, only a man bearing the burden of protecting his family’s legacy. It’s a lonely existence, but he’s duty bound. Then Jack appears, and Rion’s world is turned upside down. After a blazing confrontation, undeniable lust sparks. Isolated in the clouds, Jack and Rion give in to their desire and growing connection. But do they have the courage to let go of the past and follow their dreams?

Soon they must protect the treasure—and each other—from a new threat. And they have everything to lose.

This gay romance from Keira Andrews and Leta Blake features enemies to lovers, a sexy redhead, a castle in the clouds, and of course a happy ending.

“[E]verything you’d expect a fairy tale to be: magical, mystical, romantic, and it’s well written to boot. I was enchanted, start to finish.”
~ The Novel Approach

“A unique retelling of the story Jack and the Beanstalk… I really felt for both Rion and Jack and was glad they found each other when they needed to the most. Wonderfully written.”
~ MM Good Book Reviews