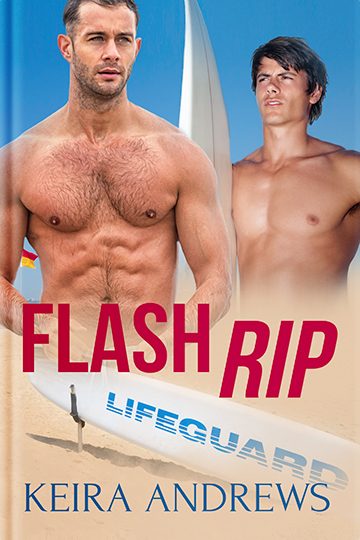 On Australia’s hottest beach, the most dangerous current is between them.

Training to be a lifeguard is tough work, but Cody Grant loves a challenge. He spends long days in the sun and surf rescuing swimmers from treacherous rip currents while trying not to lust after senior lifeguard Liam Fox—who is deeply, painfully closeted.

“Even though the sex is on the kinky side, the tenderness is what really made the scenes so damn sexy…. I definitely recommend this one! Keira Andrews never disappoints.”
~ My Fiction Nook

“Keira Andrews has a way of pulling me into one of her books almost from the first page and taking me on an adventure I didn’t expect…. Flash Rip is an emotional journey full of sexual exploration and coming to terms with your sexuality. Cody and Liam are so wonderful together and the book is a perfect balance of emotion and action.”
~ Diverse Reader

“Sexy romance and great character development, all in a really fascinating setting. If you are looking for a great contemporary story with a bit of a twist, I can highly recommend this one.”
~ Joyfully Jay LGBTQ Romance Reviews