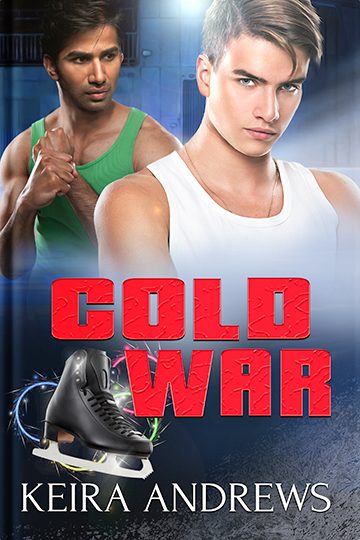 Enemies on the ice. Forbidden lovers in the locker room.

American figure skater Dev despises his Russian rival. Arrogant, aloof Mikhail is like a machine on the ice—barely ever making a mistake.

He’s also sexy as hell, which makes him even more infuriating.

Dev and his pairs partner have been working their whole lives to become Olympic champions. He needs to keep his head in the game.

The very worst thing he could do is have explosive hate sex with Mikhail in the locker room after losing to him yet again before the Olympics.

But you know what would be even worse?

Discovering that under Mikhail’s icy exterior, he’s Misha. Passionate and pent-up, he eagerly drops to his knees. His sweet smile makes Dev’s heart sing, and his forbidden kisses are unbearably tempting.

But he’s falling in love.

Only one of them can stand atop the podium. To win gold, will they lose their hearts?

Cold War is a gay sports romance from Keira Andrews featuring enemies to lovers, forbidden hookups blooming into a secret romance, light D/s, alpha men in sequins, and of course a happy ending.

Buy the ebook exclusively at Amazon or borrow in KU:

Misha and Dev, along with Bailey and Kisa, are such vibrant characters, and I’ll miss them. I’m looking forward to whatever might be coming.”
~ Rainbow Book Reviews

“This is a powerful and timely story… Keira Andrews has just become an auto-buy for me.”
~ The Novel Approach

“This is a character-driven story, with just enough skating elements included to make it real but not so much you’d glaze over if you aren’t a skating fan. I loved the ending…”
~ Hearts on Fire Reviews