You are here: Home / Library / Kidnapped by the Pirate 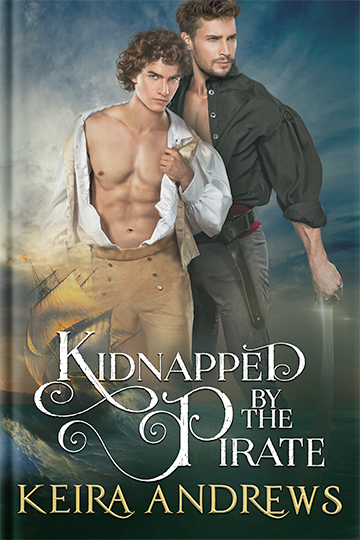 Will a virgin captive surrender to this pirate’s sinful touch?

Nathaniel Bainbridge is used to hiding, whether it’s concealing his struggles with reading or his forbidden desire for men. Under the thumb of his controlling father, the governor of Primrose Isle, he’s sailing to the fledging colony, where he’ll surrender to a respectable marriage for his family’s financial gain. Then pirates strike and he’s kidnapped for ransom by the Sea Hawk, a legendary villain of the New World.

Bitter and jaded, Hawk harbors futile dreams of leaving the sea for a quiet life, but men like him don’t deserve peace. He has a score to settle with Nathaniel’s father—the very man whose treachery forced him into piracy—and he’s sure Nathaniel is just as contemptible.

Yet as days pass in close quarters, Nathaniel’s feisty spirit and alluring innocence beguile and bewitch. Although Hawk knows he must keep his distance, the desire to teach Nathaniel the pleasure men can share grows uncontrollable. It’s not as though Hawk would ever feel anything for him besides lust…

Nathaniel realizes the fearsome Sea Hawk’s reputation is largely invented, and he sees the lonely man beneath the myth, willingly surrendering to his captor body and soul. As a pirate’s prisoner, he is finally free to be his true self. The crew has been promised the ransom Nathaniel will bring, yet as danger mounts and the time nears to give him up, Hawk’s biggest battle could be with his own heart.

This May-December gay romance from Keira Andrews features classic tropes including: a tough alpha pirate too afraid to love, a plucky virgin captive half his age, enemies to lovers, first-time sexual discovery, and of course a happy ending.

“[L]oads of very hot dirty sex in which Nathaniel is a very willing participant…. Just as their relationship is developing, the action kicks in with battles at sea, treachery, daring rescues, heroic actions, and suffice it to say that your swash will be thoroughly buckled, and your timbers definitely shivered!”
~ Gay Book Reviews

“5 stars…. This could have been just a scrumptious tale about pirates from Andrews and I would have been glued to the page, but in fact I found it to be even more…. The setting of this novel is gorgeous, and this story pulls you in right from page one.”
~ Watch and Word Society

“This book is a britches ripper of the highest calibre, packed with everything you’d expect to find in this genre – devilish pirates who are too sexy to be resisted, an innocent young scamp just waiting to lure our anti-hero down the path of emotional reawakening, daring adventures, and over the top villains and a setting which is perfectly researched…. It’s a joyful romp of a tale with a believable cast and crew of historical accuracy and some steamy hot sex leading into a glorious HEA.”
~ Mirrigold: Mutterings & Musings

“It was difficult to put the book down…. Highly recommended to anyone who loves a good historical romance. A zipper-ripper of the highest calibre!”
~ Zipper Rippers

“This is definitely added to my list of pirate top reads. The writing is strong and the main characters were charming. Recommended to enemies to lovers fans who like tropes, hot sex from a pirate who likes to charge and an eager virgin who loves with his entire heart!”
~ Boy Meets Boy Reviews