You are here: Home / Library / Ends of the Earth 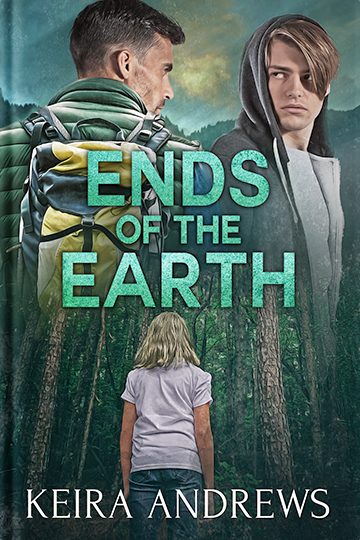 A desperate young father. A lonely ranger. A race against time.

Jason Kellerman’s life revolves around his eight-year-old daughter. Teenage curiosity with his best friend led to Maggie’s birth, and her mother tragically died soon after. Only twenty-five and a single dad, Jason hasn’t had time to even think about romance. Disowned by his wealthy family, he’s scrimped and saved to bring Maggie west for a camping vacation. The last thing Jason expects is to question his sexuality after meeting a sexy, older park ranger.

Then a hunted criminal on the run takes Jason’s daughter hostage, throwing Jason and Ben together in a desperate and dangerous search through endless miles of mountain forest. They’ll go to the ends of the earth to rescue Maggie—but what comes next? Can they build a new family together and find a place to call home?

Ends of the Earth is an age-gap gay romance from Keira Andrews featuring sexual awakening, action and adventure, a plucky kid, and of course a happy ending. Note: Previously published as Road to the Sun.

“A hunky park ranger, a lonely young father and a spitfire of a tweener. What’s not to love? We’ve got a slow burn, some intense peril, explosive sex after pent-up feelings are expressed and a touch of relationship angst. Win! And, for the record, this epilogue goes down in the Epilogue Hall of Fame™. It was brilliant.”
~ Gay Book Reviews

“A real roller-coaster ride…. I could not put this book down until I finished it!”
~ USA Today

“Keira Andrews pretty much had me at “age gap” story and “park ranger.” …This story is sweet and romantic, with a touch of suspense and a nice opportunity to get immersed in the beauty of the wilderness.”
~ Joyfully Jay LGBTQ Reviews

“There is definitely some sweetness in this book, a bit of sexiness, some unexpected family drama, and a good dose of suspense. I really enjoyed this book and would definitely recommend it.”
~ Rainbow Gold Reviews

“Highly enjoyable for any lover of a romantic, knight in shining armor story!”
~ Jessie G Books

“Likeable characters, well done suspense, and a romance that was meant to be, topped off with a bit of kinky sex and an epilogue that will leave you with a lump in your throat and tears in your eyes, all come together for a superb story I highly recommend.”
~ Sinfully Gay Romance Book Reviews