You are here: Home / Library / Beyond the Sea 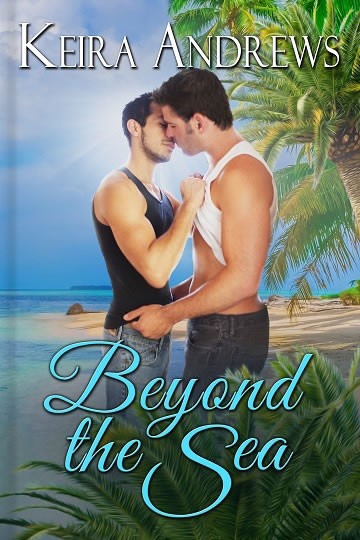 Troy Tanner walks out on his boy band’s world tour rather than watching his little brother snort his life away. Screw it. He’ll take a private jet home and figure out his life away from the spotlight.

But Troy doesn’t make it home.

The plane crashes on a jungle island in the South Pacific. Forget dodging the paparazzi—now Troy’s desperate for food and water. The turquoise ocean and white sand beach looks like paradise, but danger lurks everywhere. Thank God the pilot survived too. At least Troy’s not alone. He has Brian.

Brian’s smart and brave and strong. He doesn’t care that Troy’s famous. Brian’s real. As days turn into weeks with no sign of rescue, Troy and Brian rely on each other. They make each other laugh despite being stranded. They go from strangers to friends.

What happens when they want more?

Although he and Brian both identify as straight, their growing desire burns hotter than the tropical sun. If they explore their sexuality a thousand miles from anything or anyone, can their newfound love survive in the real world if they’re finally rescued?

Beyond the Sea by Keira Andrews is a slow-burn LGBT romance featuring bisexual awakening, scorching first times, an age gap, and of course a happy ending.

“A perfect ending for a beautiful romance that I highly recommend.”
~ Sinfully Gay Romance Book Reviews

“Andrews manages to really ground this story in the emotions of these characters…. The story is sexy, romantic, exciting, and really engaging. I definitely recommend it.”
~ Joyfully Jay M/M Romance Reviews

“The slow build of attraction between Brian and Troy makes the sex so much hotter…. When they finally act on their feelings it’s just WOW.”
~ Two Chicks Obsessed with Books and Eye Candy