Hope you’re having a wonderful summer or winter, depending on where you live. I’m hard at work on new books for you, and wanted to quickly let you know about a Kindle Countdown Deal on Amazon US and UK! (Amazon only does these deals in the US and UK–sadly it is out of my control. I wish it could be in all Amazon stores!) 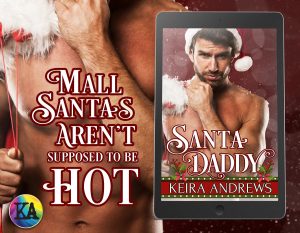 Hunter Adams is hopelessly adrift after college. He’s still a virgin, can’t find a real job, and has no clue what to do with his life. In desperation, he returns to his humiliating old job as an elf at the Santa’s Village in his hometown’s dying mall. The Santa on the job is an unexpectedly sexy lumberjack, twice Hunter’s size and age. He makes Hunter feel very naughty—too bad he’s grumpy and intimidating.

Years after the tragic death of his partner, Nick Spini has his beagle and long, hard days on his Christmas tree farm. That’s plenty. But he can’t refuse a loyal friend’s plea for help and finds himself filling in as Santa at the local mall. Despite Nick’s attempt to stay aloof, the beautiful, anxious young man playing elf brings out his long-dormant daddy instincts.

When a surprise blizzard traps them alone in Nick’s isolated forest home, their attraction burns even brighter. Will they surrender to the sizzling connection between them and find the release and comfort they crave? 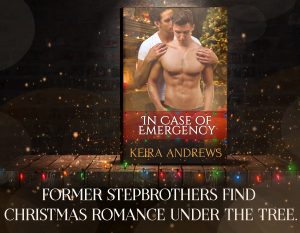 After years alone, Daniel Diaz is finally ready to shake up his orderly, solitary life. He’s about to leave for a cozy Christmas getaway with his new man when he gets the call from the ER that his former stepbrother has been admitted with a concussion and a broken hand—and Cole put him down as his emergency contact. Why the hell would he do that? Daniel barely knows the guy. After all, their parents’ marriage lasted less than a year and it was a decade ago!

But Cole has no one else to look after him and strict doctor’s orders not to be left alone. So fine, Daniel will bring him along on vacation to make sure he doesn’t starve or fall into a coma. This is supposed to be Daniel’s chance to explore romance again after locking down his feelings for too long—except it turns out his could-be boyfriend is more interested in partying and being an obnoxious jerk. Daniel sends him packing, and now he’s stuck with a virtual stranger in an isolated mountain cabin.

Cole Smith crushed hard on cranky Daniel when they were teenagers. Alone with him in a romantic winter wonderland, those feelings roar back to life. Glimpsing the caring, vulnerable man under Daniel’s frosty shell, he yearns to get closer. Christmas is a time for surprises, and Daniel and Cole discover a scorching connection that just might melt their hearts.